skip to main | skip to sidebar

Baseball, Steroids, and My Hero 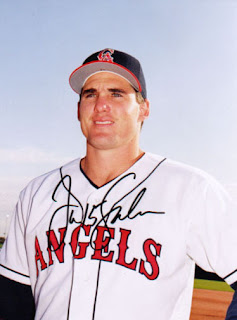 Growing up, Tim Salmon was my baseball hero...

Everyone who knows me, knows that I love the sport of baseball. Baseball is art to me, it is beautiful, it flows, it represents life. Recently, with all the steroids and home runs, I feel the sport has been more like a wrecking ball; it's all about mashing and power rather than speed and gracefulness. I really love that the sport is now starting to go back to speed and defense, but I think things like guaranteed contracts and pitch limits are still hurting the sport (but that is another conversation).

Today, Mark McGwire admitted to taking steroids throughout his career. I don't think this comes as a surprise to anyone. I am not angry at McGwire, I am relieved that he is now able to free himself of this burden. I think this, non-anger, comes in part because he never lied about it (in congress), he did refuse to answer questions, but he never lied. I think this humanizes McGwire, he felt guilty, and didn't want to talk about it, but he wouldn't lie about it like so many other players did.

It seemed that every athlete used steroids, everyone from the late 1980's to the mid 2000's is vulnerable to allegations that they took steroids. That is unfair, but it is the truth... this is also the time that I became a huge baseball fan, unfair to me, but it's the truth.

My good friends from high school know that Tim Salmon was my favorite player. When the 1993 season started, I chose Salmon to be my favorite, while my sister chose JT Snow as our favorites. Snow started the season strong (until Roger Clemens threw behind his head, and Snow started failing at the plate), but Salmon was slow and steady, and he eventually won the Rookie of the Year Award!! Through the years, every article I read about him made me love him even more. Like the time he accepted less money (by 3-4 million a year) to stay with the Angels, or the article where it said he would sit in the clubhouse before games and rather than play cards or goof around, he'd be reading books to his children.

My good friend Lil Mike (whose favorite player was Mark McGwire) has asked me "What would you do if you found out Tim Salmon used steroids?" I always said "I wouldn't doubt if he did, I guess everyone did it for one reason or another, but I have to hope that he didn't or that he used substances that were legal at the time." This leads to today...

While listening to MLB.com's coverage of this McGwire story, former MLB pitcher, Al Leiter came on and mentioned players who went to the players union to try to get MLB to have steroid testing... and he repeatedly mentioned Tim Salmon as being a strong proponent to have testing, that Tim Salmon was very outspoken in trying to clean up the sport.

Hearing this almost brought a tear to my eye, literally, I started choking up. This is the power baseball has on me, the power it had in shaping me as a man... Today, the little boy in me feels a great weight being lifted off. My hero was clean, and he was trying to clean up the sport I loved. Wow. Now, looking back on Salmon's career, I feel a bit of bitterness towards all those steroid users. Salmon never made the All Star game, and while he was an above average player in every way, there were many other (roided) players that diminish his numbers.

I found this quote by Salmon (in an 2009 LA Times article by Ben Bloch), it makes me sad, but this is probably the story of many players:

"For me, as I broke down and my play became less at the level that I expected, I always was thinking it was because I was getting older and things like that," Salmon said Friday at Angel Stadium. "I'm facing guys that I used to be able to hit and all of a sudden I can't hit them anymore and I'm going, 'What?'

"I always took that personally, like, man, I'm losing it. Now I can look back and say, 'OK, maybe it wasn't so much me.' . . . Maybe I can look back on that and say, 'It wasn't because of my talent, because I was doing all the right things.' "

Tim, you were not only talented, but you were a great role model. Thanks for being you, you helped me become the man I am, and you didn't even know it.
Posted by Dik Pose at 1:14 PM 8 comments: